The name Captain Buzz or Buzz Barnstormer carries the connotation of a pilot that is a hotdog or someone that buzzes the airfield, maybe, at every given opportunity. While the buzzing the field at every opportunity might be accurate, a hotdog pilot I definately am not. However, much to my dismay, the name did not originate from fabulous ground straffing maneuvers, but a name given to me from some cherished co-workers after my first flight as a Captain in the 1900.

You see, I sat right seat in the 1900 for 6 months, then upgraded to captain. And on a day that was supposed to be a really exciting day for me, turned out to be a dissaster.

My return flight from Andros Island to Palm Beach International (PBI) was to be my first flight behind the controls as captain. The day was perfect for my first flight, calm air, cool day, alittle rainy (which would help to make a really smooth landing). The flight was to take only 55 minutes. We were to land on 27R, exit the runway, and head to Customs, something I had done a million times before, it seemed. But at about 1 mile from the runway, a flock of buzzards flew up from below us and directly into our flight path. I never saw them because they blended into the scenery below. I thought, "Should I try to veer to the right"....more birds over there too...."veer to the left"....at only a few hundred feet or so off the ground, this is not the time to be making any abrupt maneuvers. So I stayed the course.

I thought that I had escaped scottfree, then, much to our surprise, there was one last bird in front of us. I knew we were going to be in trouble when the bird acted erratically, then tucted its wings to dive. It looked as if it was going to go right through the cockpit window, and at the last second, veered off to my left....WHEW! We missed it, I quickly thought....SMACK!!! Looking out the left window, I saw the buzzard wrapped around the left wing, just outside the left engine nacelle. Maintaining control of the airplane, a few seconds later, we landed with no more incident. 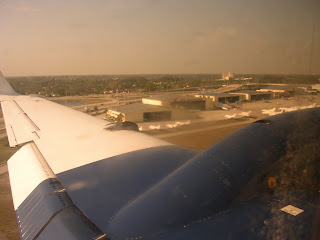 We called the tower and reported the bird strike, then taxxied over to Customs and shut down. I quickly exitted the cockpit, openned the door to the airstairs, and ran down to see what the damage was......and "STIIIIIIIIIIIIIIINK!!" Oh my Gosh, I don't know if many of you have ever hit a buzzard before, but they have more stink in them than a garbage dump heap.

I was really not cherishing meeting up with the Direction of Operations and the Aviation Manager. After clearing Customs, I walked to their offices, and entered the building to see the D.O. with a large smile on her face, "Well, how was it?" "Besides the football size hole in the left wing...GREAT!"

The total damage report for the repair of my first flight as captain exceeded $150,000. I am what you call a High Maintenance Captain :o). A first time passenger was snapping pictures of the flight and the landing and just so happened to take a picture just after the bird smacked our wing. What are the chances of that? The ground crew and maintenance crews all dubbed me "Captain Buzz" to commemorate and immortalize my memorable flight, one that I would like to forget!
Posted by Unknown at 10:57 AM No comments: