There were many things to think about when making a change like this, the biggest of course it a weight and balance issue is created. I started thinking about when I travelled, what were the items that I could not fit into my RV? The heavier luggage I never had any difficulty with, because it always was stored in the larger bin area behind the rear seat. But once that area was full, things like pillows, sleeping bags, my 2 person tent, and extra pair of shoes, and things of that nature were the items that would not fit.

These items were not really heavy. If I were to place my pillow and the far aft of the plane, followed by my sleeping bag, then the tent, and all the other stuff being lose, more towards the front, that would put all light stuff in the rear of the plane and all heavier stuff towards the front. Hmmm, sounds like it could work. But the wise thing to do at this point, would be to calculate the weight and balance for the aircraft, and then calculate what the extended baggage compartment would do to the weight and balance. Then, if everything was ok, determine the limitations.

So, that is what was done. Here are the calculations with the added extended baggage compartment. 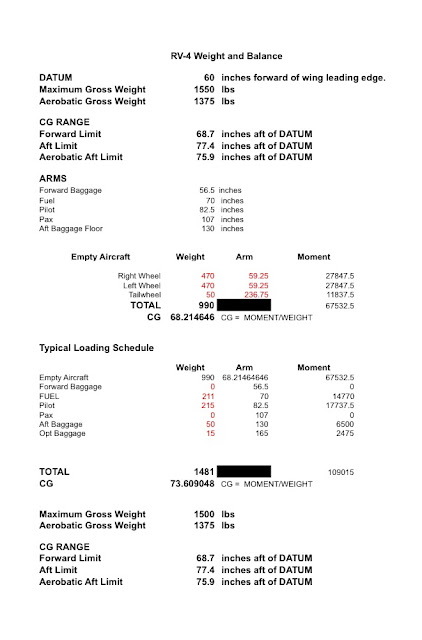 Notice for the ARM I used 165 for the extended baggage compartment. I used this number because there was no way all the weight of an item placed back there would be at the 170 mark. Therefore, moving the center of the possible furthest aft weight up to the 165 mark seemed more plausible. I used all weights at their maximum to see what it would do to my CG, and as you can tell, the CG still was at 73, well within limits. I very rarely, if ever, carried bags that weighed 50 pounds, and never in my life carried a pillow that weighed 15 pounds.

Some things to consider at this point were....1) I did not want to build anything that would hinder the operation of the control rods for the elevators, 2) I still wanted to have access to all moving parts in the rear of the plane for inspection purposes, 3) I did not want to hinder the static ports that were located above the longerons in the next bay back.

Taking all of these things into consideration, I proceeded to make a shelf out of aluminum sheet that was braced with stiffeners, the same way we stiffened the control surfaces like the rudder and the elevators.  This worked out nicely. Then I riveted a brace to the further aft bulkhead so that it would hold the new shelf in place. Fitting my body back into the baggage compartment was a real challenge, and on the more-times-than-not occasion that I squeezed myself back into that God forsaken hole, just to realize that I had forgotten a tool, I became very good at waiting for the next passer-by to hand me my tools.

I drilled holes into the longerons and bolted the sides of the extended baggage compartment to them, so that I could remove them later for inspections. Once everything was bolted in place, the last piece of the puzzle had to be installed. There was still a gaping hole at the rear bulkhead where baggage, shoes, or anything else I could have back there, could find its way to hinder the movement of the elevator control rod. I considered how I was going to close this area up for sometime, as climbing back into that abyss was not desirable, as well as resting my 200 pounds on that shelf would not be favorable as well. I decided upon a better route. I purchased a 3 inch piece of foam, and made a pillow out of it that who fit very snugly into place at the rear bulkhead. The pillow could not be pushed through the hole, as it was a firm foam. I put the same material on it as my seats, and decided to embroider my seat logo on it as well just to give it that personal touch. It worked like a charm and was super easy to install, requiring just a broom handle to push it into place.

Carpeting on the new shelf helped to dampen the noise coming from the back of the plane, and helped to make it more esthetic.

Here is a picture of the finished product for my extended baggage compartment. 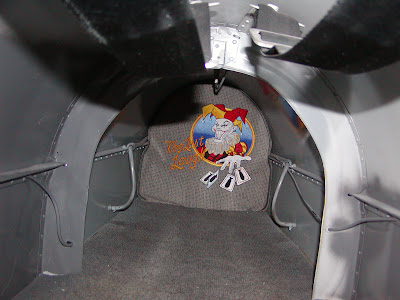 My new extended baggage compartment turned out really nicely. With all the added space, I could easily carry a set of golf clubs (accept I don't golf), but more apres peau, I could carry my gas powered Go-ped scooter strapped in place, so that I had cool transportation when I arrived at my destination.

I hope that this helps you with building an extended baggage compartment in your plane, but I will also strongly advise that you calculate the weight and balance numbers on your plane first, as all experimental planes are different.