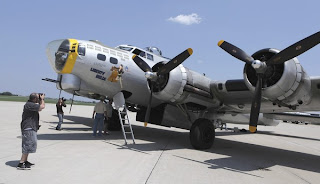 When World War II veteran Ira Weinstein heard that a vintage bomber had made a fiery emergency landing near the Aurora Municipal Airport today, chills coursed through his body.
Weinstein, who turned 92 last Friday and spent much of his military career flying B-24s over Germany, had planned to be on the plane with his grandson.
The pair had originally been scheduled to ride in the B-17 "Liberty Belle” with a handful of other veterans last Friday, Weinstein said. But the flight was postponed due to a “minor oil leak,” Weinstein said. 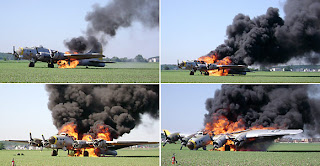 On Saturday, Weinstein said a representative with the Liberty Foundation called him to say it had been fixed and invited him and his grandson to go up in the plane today.

But Weinstein, who lives in Glencoe, decided the long drive to Aurora would not be worth it. He and his grandson opted for getting lunch together instead.
“I was lucky this morning,” said Weinstein, who was shot down during World War II and held as a prisoner of war. “When I looked at the plane, the way it was (torn apart), if there were maybe two more people in there, maybe we wouldn’t have gotten out. I’m glad I wasn’t there.”
World War II veteran Robert Starzynski, who served as a tail gunner on a B-17, was supposed to fly on the “Liberty Belle” last Friday. He was stunned when he saw footage of the plane on fire.
"It flew yesterday, it's been flying all week," said Starzynski, 87.


Starzynski, who lives in Chicago, and his son had planned to take a ride on Sunday, but didn’t because they were both not feeling well.
Starzynski said seeing the plane brought back memories from the war.  Starzynski’s plane was shot down in France in 1944 and he spent several months with the French underground.
"It makes you sick, I've seen it during the war," Starzynski said. "Fortunately the seven people on board made it." - Dailypress.com
Posted by Unknown at 12:23 AM No comments: