Got Gas, Will Fly 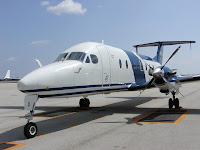 I was thinking about the gas crunch that we had this past summer, and in North Carolina I saw prices over $5.45 per gallon for JetA. I know in other parts of the country the prices were even worse. But as I was thinking about this gas crisis, it brought to my mind a very funny flying story that I think ya'll might enjoy.
I made several flights with my Director of Operations, Betsy, when I worked at AUTEC, flying a Beech 1900D. Before I knew her very well, she was very difficult to read. She has piercing blue eyes, that when she looks at you, she looks like she's seeing right through you. She's one heck of a stick too I might add, so having an ego in the cockpit is not only going to go nowhere, but will be delt with a piercing blue-eyed stare and one mean right hook!
It took me quite a while not to be intimidated by Betsy. She could fly circles around most people that I knew. She asked me one day during a check ride, "Do I intimidate you, Scott?" Ummmm, nooooo.
After about 7-8 months, we became good friends and the intimidation factor went away. I had learned to fly the airplane much better and she was very comfortable with my decision making and handling of the aircraft.
One day we were paired up together to fly, she was to fly the first leg. With about 15 minutes left in the flight I decided to put forth a challenge of precision and skill, which I knew she would be all over like flies on stink. I told her that I would challenge her to a precision landing dual. The challenge was this: The pilot who exercised the smoothest landing...wins...and you could not hold the plane off the runway for hours trying to squeak it on. The landing had to touch down on the first 1/3 of the runway. Of course, when I made the challenge, her response was, "You're on", accompanied by a very evil laugh.
By the time the rules of engagement had been discussed and agreed upon, we were turning final. Now everytime she would land the plane, she had a special routine that she would go through. It was like clockwork. She would bounce in her seat a few times, pushing herself up high in the seat, make a few passes with the trim wheel, and you could see the level of excitement starting to escalate. "Aaaaawe, I have this one nailed, you are going down, Irene!" She was obviously getting rather excited about the on-coming slaughter, as the name Irene might indicate, and with a sh*t eatin' grin, she reached up with her hand and brushed the 4 bars on her shoulder, as if to say, "Hey, Rookie, lemme show you how a pro does it".
She had the plane trimmed to perfection, speed dead on, and as we were coming across the numbers, I doubled over in my seat and moaned out, "AWWWWE, I'VE GOT GAS!!" "WHAT??", she said in a complete shock. She was so thrown for a loop on that one that she lost all concentration and we went "SLAM" into the runway. Well, at least the second hop wasn't quite as bad as the first, but as you all know, we log them all!
With my arm black and blue and sore from the followed right hook, I laughed until I couldn't stand it anymore.
So, the next time gas prices have you down, think about this story, and after a chuckle, maybe it won't hurt so bad. 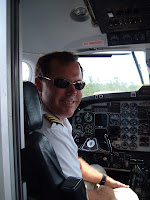