Honey, Can I Borrow a Lawn Chair, Rope....and Some Glue! 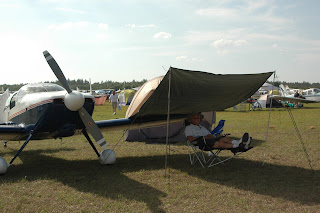 My father has always been an aviation enthusiast. I guess this nut didn't fall too far from the tree here at all huh? Mom, always tolerated his shinnanigans about how they would fly all over the country together and see this and that, and of course... fly into the sunset....together! How romantic. Every aviator dreams of this. Even in the movie Pearl Harbour, boy meets girl, boy then slips past the armed guards and takes girl for a ride in highly suffisticated and expensive military plane, and into the sunset! Hmmm, that could happen!

Many years ago I was building a Van's Aircraft RV6. It was coming together fine. It would have come together faster had I not had to continuously change shirts from all the drool that was landing on my shoulder as my father was looking on. So, we started to build it together. I enjoyed this because it gave me alot of father/son time.

One day, Dad came into the garage and announced that he had purchased a Homebuilt Glasair II kit and that he much rather preferred to work with fiberglass than with metal. Shortly there after, the kit arrived, and he commenced meticulously working putting it together. I know that I had read somewhere that if the temperature wasn't right or if the stars weren't lined up properly, or something to that effect, that the fiberglass might not cure correctly. Hmmm, not a very comfortable feeling.

Enter Mom into the picture. She walked into the garage, looked at the mess of plane spewed all over the garage, and said, "What are you going to do with that thing?" Doesn't that kinda sound like, "I can't wait to go flying into the sunset with you honey, just like in the romantic movie Pearl Harbour ?? ?? ?"

Let's jump back a few years. Dad was an extremely talented ocean diver. In fact rumor has it that he was offered a job off the coast of Africa to dive, and turned it down to get married and have a family. He had purchased this.....thing....it kinda looked like a dragonfly that you tow behind the boat with paddles on it that you can dive down underwater. Well....he almost drowned using it.

Jump forward a few more years. We had always had a boat in the family. My father was still in the diving stage of his life and he and his friends would take trips to Jack Tar Village, which was located on West End of Grand Bahama Island. There they would enjoy the sun, the sand, go diving, eat lobsters.......into the moonlight!!

"Common honey, go with me in the boat, across the ocean to Jack Tar. There's going to be lots of boats crossing. It will be tons of fun." She agreed and halfway across, the waves started to get very large, one of which crashed over the bow and smashed the windshield of our boat. Mom flew home.

Fast forward a few more years. The problem with the boat that had the broken windshield was that it was obviously too small! So he got a bigger one, and he thought that he would surprise Mom with it. He drove the boat to the marina down the street from our house, tied it up and drove home with a friend, got Mom, held her eyes as they got to the pier, and said, "Ta-Daaaaa, What do ya think?" Mom looked at the boat that was now resting nicely at the bottom of the intercoastal, and said, "That's nice honey"...and went back to the car. The plug had somehow come loose from the back and the boat had sunk.

Which brings us back to the airplane. Boats are all gone...they are obviously really bad luck. Dad and I are in the garage looking at the tail section that he had built. I asked, "How do you know that the fiberglass has set properly, and won't come loose?" To which he responded, "Son, fiberglass is really really strong, take a look at this." He pulled the blocks that were holding the tail section down to the table, and the whole top of the tail section sprung loose. Well, you should have seen the surprise in his eyes. "Don't tell your mother". 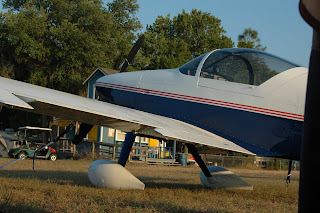 I was happy that he sold that thing, and we started working again on metal planes. He later bought a very nice, flying, RV6 that a mutual friend of ours owned. He learned to fly it quite nicely, and now flies, with Mom, all over the southeast....and into the sunsets....together! 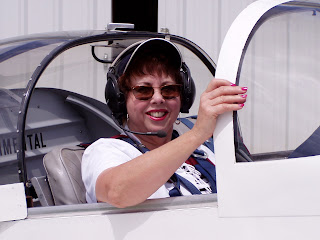