A Miracle on the Hudson 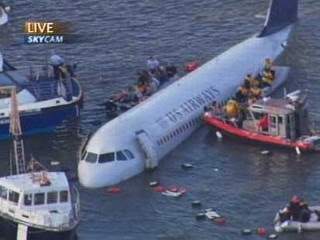 Pilots are constantly training for the time when engines fail, or catch fire. We go through recurrent training every six months or so and are put through the ringer. There are electrical failures, hydraulic failures, this system failure, that system failure. But very few of us have ever really experienced a total failure in the sky where a controlled landing off-runway would be necessary.
Today, however, was not one of those"same-as-usual" days for the crew of US Air 1549 out of LaGuardia. Apparently, the plane struck a flock of birds and both engines of the Airbus 320 became inop, necessitating a controlled water landing in the Hudson River. We usually read about this type of landing in the morning newspapers as being fatal because of icy water conditions, or maybe not enough time for the crew to position the aircraft properly to rest the plane on the water. The skill necessary to accomplish a successful water landing under emergency circumstances with an airplane that is crippled is tremendous. In addition to that, planes that make water landings are more times than not, broken apart on impact. Today, this was not the case.
Today, the pilot of the Airbus 320 was able to take his crippled jet and masterfully set it down in the Hudson River, keeping it completely intact, allowing all 155 passengers and crew members time to exit the plane in an orderly fashion. Today, all the training and procedures that this captain received over the course of his career, where put to the test. And a Hero emerged with flying colors!!
Chesley Burnett "Sully" Sullenberger III was the captain of that flight. His remarkable flying skill as well as his ability to remain professionally calm saved the lives of every passenger and crew on that jet. His quick thinking and ability to execute emergency procedures under duress, by the grace of God, was the sole reason that 155 people are seeing their loved ones tonight.
So Captain Sullenberger, here's to you, a job well done sir!! (salute) Go home, have a beer (or 2), and remember to thank God for keeping you in the safety of His loving hands.
I want to be the first to join the "Captain Sully Fan Club". If you read this article and want to join the "Captain Sully Fan Club", just leave a short comment posting your appreciation for him and your name...thanks! 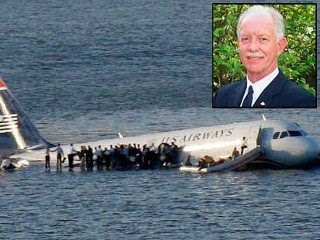